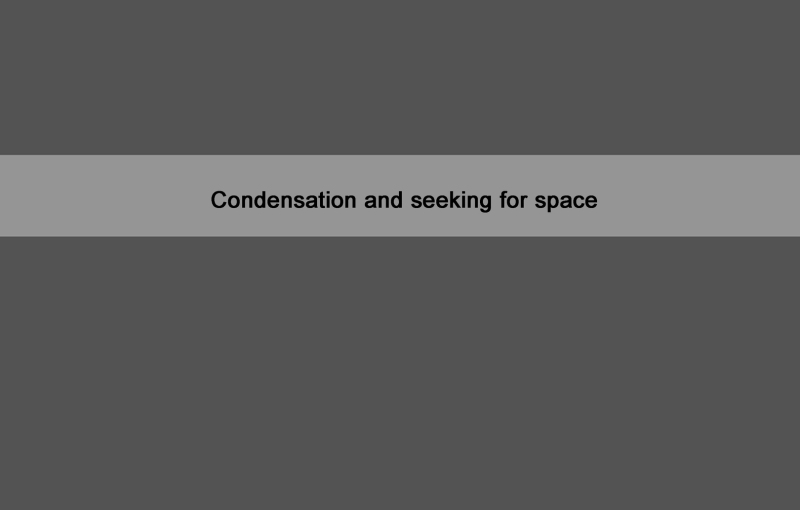 The continuous seek for a distinctive synthesis of traditional elements into his work has led to a refinement of Fracasso's aesthetic repertoire and has finally developed his own mode of expression, sumarized under the overall theme (simply by a lack of better words) 'Concrescismo II'. All paintings of this advanced Concrescismo phase are presented in this catalogue.

The variations to the first period of 'Concrescismo' are quite striking. Artistic expression and intended meaning merge into new aesthetic instalments of balanced harmonies, cultural symbols which are more than in Concrescismo cut into their elements of lines and contours and are modelled into the aesthetic totality of graphic, light and shadows. We, as viewers, are not necessarily aware of the three stage genesis of this aesthetic whole.

Firstly, Fracasso replicates the theme from a blueprint, then, secondly, abstractifies it by pencil variations and modifications of lines and contours, by which the original realistic idea is transformed into an order of cubes of different shapes in a now different space sphere. Thirdly, color is added and – step by step – the contours appear in a different light slowly uncovering a multi-dimensionality of abstract forms and elements. By proceeding along these stages, traditional and abstract art finally peacefully merge, the rivalry of 'Figurative Paintings' and 'Avantgardistic Abstraction' is absorbed and – this is Concrescismo – harmoniously united. Whereas Lucion Fontana's Spazialismo (see No. 3) is inspired by the limitations of material elements and its aesthetic overcoming (such as by cuts into canvas), Fracasso feels somewhat reluctant towards such romantic efforts. His "Spazialismo" version redefines threedimensionality by a multiplicity of facettes, colors as well as variations of light and shadow, which, by no means, eliminates space as such – quite the contrary – enhances the metamorphosis of space (see as an example "Sixtinische Madonna", No. 5).

Fracasso's major technical 'device' is the fracture which replaces the symbol of colorful balls. Modifications of this kind do not simply occur on the surface, just as a new 'technique'. They parallel inwardly felt crises of the painter himself. The colorful balls symbolized joy, luck and perfection. Whenever they dance and bounce in the right light and shadow, they appeared to be of unsurpassed simplicity. Still today, harmony is a central element of Fracasso's artwork. The huge spaces of his former period are increasingly eliminated. They are frequently moving downwards, less so upwards. They now are somehow disconnected, broken up into different angles. Multidimensional spaces of tremendous depth and width also represent instability. Figures have lost their balance, space is about to fade away. Familiar signs so easy to identify have disappeared. Artistic imagination does not necessarily determine technical instalments. Quite the contrary is often the case: by exploring diverse techniques, their 'language' and expressiveness are discovered. Maybe this is one reason, why Fracasso favors the triangle, without a shadow in its center, but outside of its angles.

Elements of traditional Italian culture are not only to be represented by the selected themes but also by the distinctive composition of colors, by contradictions and hierarchies, which a magical code seems to de- and reconstruct (see No. 6 "Headache"). The pictures are thus not contradictory but tensionally related to each other. They reveal (such as Chirico tells us in his own style) an alienated universe (see No. 7) although form and colors do not proclaim any distruction of the world. They seem to rely continously on the idea of utopia, which somehow slipped into the pictures. Arrangements of unordered decomposition are not to be found in Fracasso's entire artwork. Even instability reveals in Fracassos paintings remains of orderly world construction. Seek for order is also represented in the clearness of colors (in opposite to Sironis 'Autoritratto', 1913 (see No. 8).

Fracasso's message is – if there is any – the following: the nature of the human being is in a generalized kind not visible. It can only been experienced in a second's glance, in a sudden appearance. These are, in Fracasso's viewpoint, not clichés or stereotypes. Figures of his paintings can be identified by lines, forms, colors, by the interplay of lights and shadows. So the Pipeline to Europe (see No. 9) can be read as a coloreful mosaic, which expresses by its entangled net the message: the concept of Europe is a multi-level connection and does not simply stand for technical instrument (such as for transporting oil). Especially the portraits, which he created in relation to already existing artwork, are striking in this respect. Dürer's self portrait is translated into Fracasso's aesthetic form-color-contour language (see No. 11). Fracasso almost always proceeds from citation to an entirely transformation and modernization of the original signet. The already mentioned "Sixtinische Madonna" (Raphael's painting is to be seen in Dresden/Germany) is reduced to the original theme of Madonna as a travesty of eternal sweetness which refers to the current most popular interpretation of the original painting. In a quite shocking way proportions and color are transformed into Fracasso's aesthetic world, in which even a Madonna has to continuously give proof of her completeness.

Encoding seems to be the pleasure of the artist, decoding the one of the viewer. Let us take as an example the picture "Goethe in the Campagne" (see No. 12). Again Fracasso has gained a transformation of the original painting, which the experienced viewer is able to decode at once. By doing this, he has left his former intention to present pictures, meant to charm the viewer on first sight. An intense study of the painting unfolds its difference and variation. Or let us take a look at the black and white triangle (see No. 1): an element is isolated from the interrelation of diverse triangles and cubes. Those, who still seek the familiarity of traditional expression in a more romantic sense, may consider that 'things themselves' are subjects of Fracasso's artwork.

In Fracasso's viewpoint, figures transform into landscapes. In his perspective, exhibitions cannot provide an appropriate environment for the unfolding of an aesthetic atmosphere. Simply because paintings need space to transmit their worlds within the silence of plain walls. It is this art environment that keeps the viewers fascination focussed on one painting, in order to let the painter's world version unfold over time.